“They´re about abuse but also about strength and perseverance”

Finally we had the opportunity to welcome Marin Alsop to Gothenburg – a fachinating conductor and first woman to become Chief Conductor of a major American orchestra, the Baltimore Symphony Orchestra.
In this interview Alsop talks about her first meeting with the Gothenburg Symphony Orchestra and about her thoughts on the program from the concert performed 20 May (with MacMillans The Confession of Isobel Gowdie and Bartóks Duke Bluebeard’s Castle):

“I think there is an obvious female theme throgh the program, but beyond that I think its a more subtle connection between these two pieces, they´re about repression and abuse but also about strenght and perseverance.”

The Confession of Isobel Gowdie from 1990 is a piece that without words, only with the sounds of the orchestra, tells of the 17th century mass hysteria surrounding the witch trials, and especially the events of 1662 in the Scottish town of Nairn. “A Prayer for a Murdered Woman,” James MacMillan sums up his work.

Conductor Marin Alsop, who believes “music can change lives”, is hailed for her trailblazing and inspiring programmes. 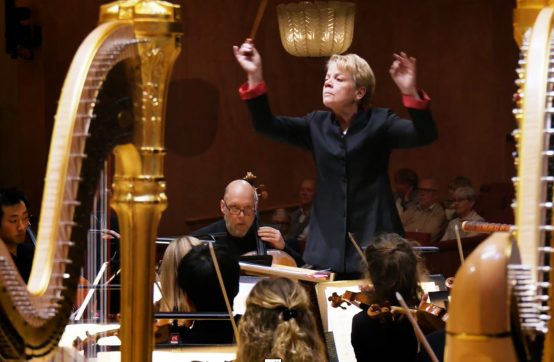 The Confession of Isobel Goudie

Marin Alsop puts a lot of thought behind every program she conducts, a program should have a message and a sense moral.