Here you’ll find everything you need to prepare your students for a study visit or concert. 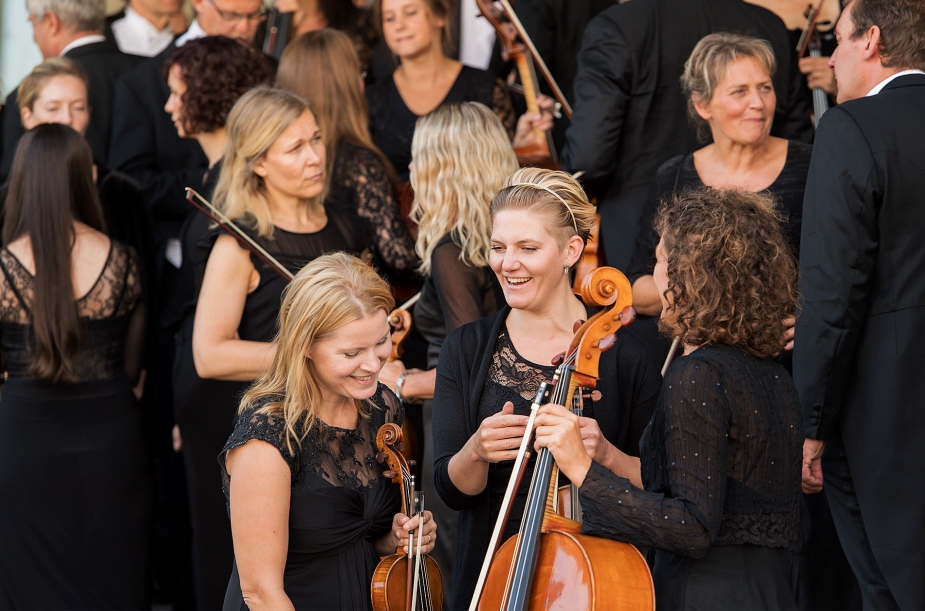 Stands in front of the orchestra and leads it. Is the one who is responsible for the rehearsals and decides how the music is played.

Before the concert begins, the oboist takes a tuning note, the note A. Everyone in the orchestra tunes their instruments to the same A and in this way it usually sounds better! It’s called intonation – when everyone plays exactly the same, it sounds pure.

A longer orchestral work with several parts is usually called a symphony. The parts are called movements. A symphony can be long, up to an hour or more. Sometimes you may find it boring. Or absolutely wonderful.

The stage where the musicians sit.

Very important people for the orchestra to work. They carry chairs and music stands and keep the notes in order.

A giant piano fixed in length.

Garments that the members of the orchestra often wear at concerts.

The person who arranges everything before the concert begins.

If there is a vacancy in the symphony orchestra, an audition will be arranged. Then musicians come from all over the world to compete with each other, and through the audition the best one is chosen. There may be several hundred competing for a job. Applicants play – one by one at a time – behind a big screen to make it fair for everyone.

Before each concert, the musicians work for several days concentrated to make the music sound as good as possible. It is called rehearsing.

The music played at the concerts. It may be older, from the beginning of the 18th century or so, then it is called baroque music. Music from Mozart’s time is called Viennese classical. Music written in our time is called contemporary, and is considered by some to be difficult to listen to. But it is important to play music from our own time as well. Even 150 years ago, one might think that what was contemporary music at the time was difficult to access. The music is constantly evolving. If the piece is played for the first time, it is called the premiere.

The one who writes the music.

When the concert ends, the audience applauds. If they like it extra much, there are usually bus whistles, and sometimes the audience stands up. It’s called “standing ovation”. One does not usually applaud between the movements in a symphony, for example, because the parts of the music are connected. And the silence that is sometimes found in the music is extremely important. It can be absolutely magical!

The written language of music. Learning to read notes is just as easy as reading letters!

A page with notes.

A collection of tones that sound nice together. If they sound bright and happy, it’s called a major chord, and if it sounds a little sadder, it’s a minor chord. For example, Who can sail without wind goes in minor, while Twinkle, twinkle little star goes in major.

Designation in the notes when the musicians are to play silently.

Means the musicians play loud! The slightly older name for the instrument piano was pianoforte – and that means that it was an instrument that could play both silent and loud.

For a few weeks each year, the Gothenburg Symphony Orchestra plays special concerts aimed at children. For us at Gothenburg Concert Hall, it is one of our most important assignments.

Here you’ll find everything you need to prepare your students for a study visit or concert.