When you discover new topics, you often discover new words. Here are some of the words you use when describing an organ and organ music.

* = see the entry for this term

The totality of the devices in an organ that make the depressing of a key result in one or more pipes sounding.

The beginning of a sounding tone

A division* of the organ with a small number of stops and a light, high-pitched sound

The ‘cockpit’ of an organ, with manual* and pedal* keyboards* as well as couplers* and other devices for determining tone colour and loudness

A device (mechanical, pneumatic or electric) that enables stops* in more than one division* to sound when one manual* is played

Any of the main sounding parts of an organ, consisting of a number of stops*

A stop* in which each pipe is constructed more or less like a recorder; the majority of the stops in an organ are flue stops, and the stops visible in the organ’s façade are of this kind

The number of regular oscillations per second that produces a tone of a certain pitch (for example, 442 = a1)

The pitch heard most prominently when a tone is sounded; the fundamental always sounds together with a number of harmonics*

A device operated with the foot, by means of which the stops* of the organ are made to sound in a predetermined order, enabling powerful crescendo* and diminuendo* effects

(French: Grand Orgue; German: Hauptwerk) The biggest and most powerful division* in an organ

Tones of higher pitch sounding together with the fundamental,* thereby creating the sound of the tone

The set of keys to be played on an clavier instrument, such as an organ or a piano

The first and harmonically fundamental tone of a scale (for example, C in C major)

A keyboard* played with the hands

a keyboard* played with the feet; the division* sounding when such a keyboard is played

‘expressive pedal’; a pedal* division* equipped with a swell* device

The totality of pipes in an organ or a division*

The most important and powerful flue* stop* in an organ

A French term for a division* equipped with a swell* device (in older French organs a division with a small number of stops, without swell)

Stops* constructed in a special manner, producing a sound similar to that of reed or brass instruments

A division placed behind the organist’s back

The various measurements of and proportions between different parts of an organ pipe, for example, the relationship between the pipe’s length and width (diameter or circumference)

A stop* intended for use, or used, in a solo function, accompanied on another manual*

A set (in mixtures* several sets) of pipes with different pitches but similar in sound and construction, each pipe corresponding to a key in a manual* or pedal* division*

A device, operated with the foot, for opening and closing shutters placed in front of the pipes in a division*, enabling crescendo* and diminuendo* effects

The organ builder’s art, creating the desired sound of an organ pipe

A wooden box, placed below the pipes, where the air used for making the pipes sound is stored under pressure 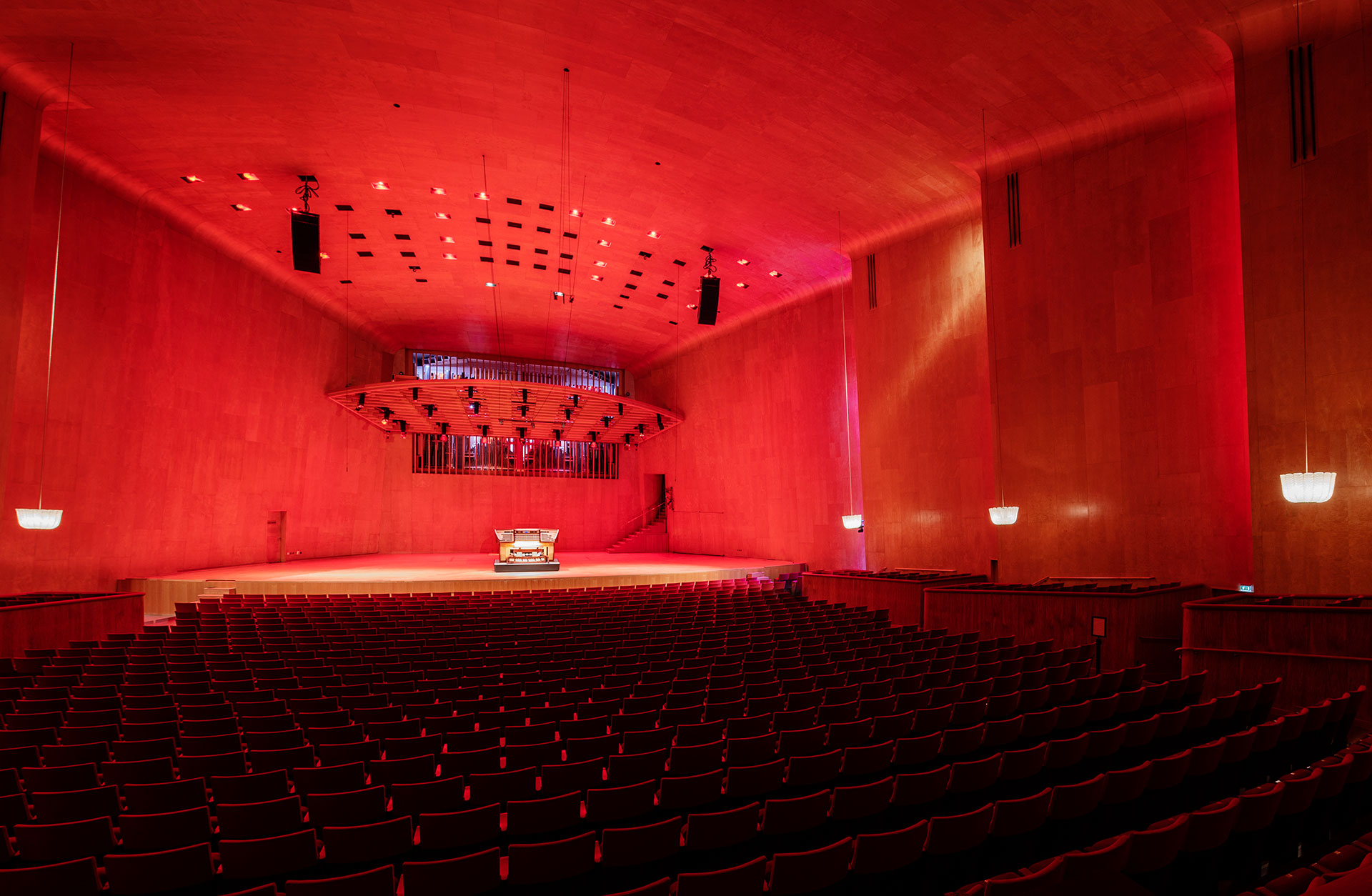 The queen of instruments

The organ is called the “queen of instruments” and for a good reason: no other acoustic instrument is so varied in sound and dynamics, from the weakest, solitary tone to massive chords that make it vibrate in floors and walls. The organ in Gothenburg Concert Hall consists of more than 9000 pipes!