When the Gothenburg Concert Hall was completed, in July 1935, a competition was announced for the decoration of the Götaplats foyer’s end walls, “al fresco” or in textile. Sven X: et Erixson (1899-1970) was one of the winners with his contribution Music on the square, a fabric that has motifs taken from Spain and North Africa. A fiery Spanish dancer, an African playing the harp, two men fiddling with their string instruments and spectators and people are seen moving in a concentrated and bold perspective. The man who plays a banjo-like instrument is said to be Sven Erixson himself, and the fair-haired boy his son.

The model for Melodier vid torget, a cardboard sketch, hangs in front of the entrance to the Stenhammar Chamber Hall. Here you can see how the artwork has been developed and enriched from sketch to finished tapestry. Sven Erixson was known for his colorful works of art and he tried many different design languages during his active life: painting, graphics, glass, fresco, textiles and more.

Performing this weave was a challenge. Due to the size, 6 x 9 m, a special loom had to be made. Several different weaving techniques were also used to do the colours and the detail work justice. The work was led by textile artist Barbro Nilsson, who with six assistants carried out the weaving work 1937-1939 in close contact with the artist. In addition to Sven X:et Erixson, Barbro Nilsson collaborated with artists such as Endre Nemes and Olle Nyman. She was also head teacher of textiles at the School of Art and Design 1947-1957 and artistic director of Märta Måås-Fjetterström’s weaving workshop 1942-1970.

Lars-Erik Åström has described the work in the book Sven Erixson’s art (1967): “It is not a textile translation of a very complicated painting, it is a wall of life, colour and textile material where everything is purely healthy and alive.” In the spring of 2015, the fabric was cleaned and restored, which gave the colors new luster and life. 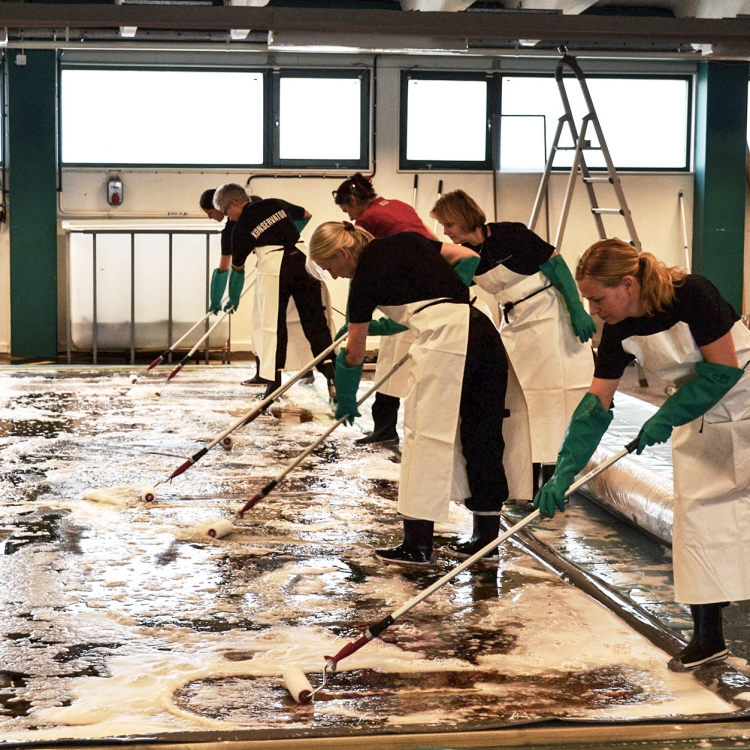