Just when summer is about to be in full swing, we present Johannes Brahms’ Symphony No. 2 in D major, which has often been called Brahms’ “pastoral” symphony. He wrote it during his summer stay on the beautiful and idyllic Lake Wörthersee in Austria in 1877.

Symphony No. 2 has been referred to as a happy and beautiful symphony. Perhaps that´s why it only took Brahms an inspired summer to write it – unlike the first symphony, which took him over 20 years to complete.In this concert, Odin Ensemble performs Symphony No. 2 on instruments from the early 20th century. Conductor is the ensemble’s founder and leader Alec Frank-Gemmill. The recording was made on a beautiful spring day in Betlehemskyrkan in Gothenburg and is a co-production of the Gothenburg Symphony Orchestra and the Odin Ensemble. This is the third program presented by Odin Ensemble and the first together with GSOplay. The group was formed last year during the pandemic and performs on instruments from the early 1900s. Odin was inspired by the sound and style of the early recording era and performs masterpieces of the orchestral repertoire scaled down to chamber size.

Alec Frank-Gemmill was born in 1985 in the United Kingdom and is today the principal hornist of the Gothenburg Symphony Orchestra. In this interview, you can see and hear him talk about Odin Ensemble. 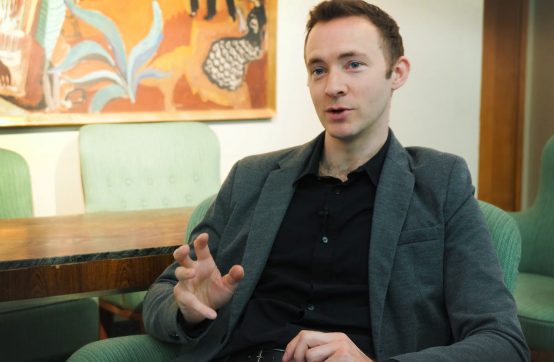 Get to know Odin Ensemble that was formed last year during the pandemic.