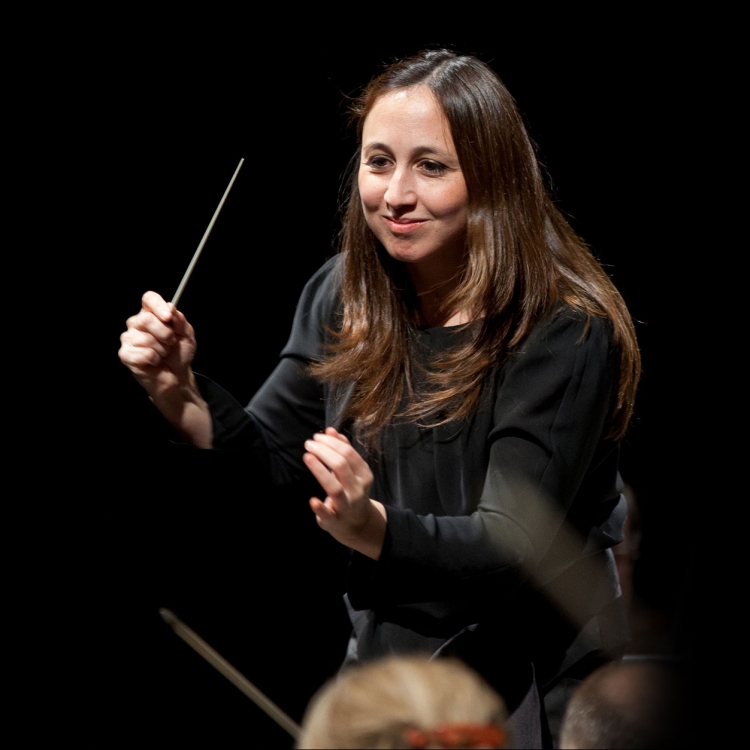 Albert Schnelzer is one of Sweden’s most acclaimed composers. To celebrate the city of Gothenburg’s 400th anniversary he has composed a large oratorio for orchestra, choir and soloists, and now it is finally time for the world premiere!

The theme of Schnelzer’s oratorio SALT is the sea, which can be full of promise and exciting, but also frightening. The soprano represents the sea, and the baritone soloist represents mankind and the migrant. All texts relate to the sea, and there are musical references to works such as Debussy’s La Mer (The Sea). The oratorio was commissioned by the Gothenburg Symphony Orchestra to celebrate the city of Gothenburg’s 400th anniversary in 2021.

During this concert, which is rich in contrast, we also hear John Adams’ Doctor Atomic Symphony, which is about the testing of the first atomic bomb, and Samuel Barber’s meditative Adagio.

The orchestra is led by the internationally acclaimed conductor Joana Carneiro.

Get to know the composer Albert Schnelzer.

Gothenburg Symphony Orchestra
The Gothenburg Symphony, called "one of the world's most formidable orchestras" by the Guardian, has toured the USA, Europe, Japan and the Far East and performed at major music centres and festivals throughout the world. Chief conductor is Santtu-Matias Rouvali who started his tenure in 2017. Barbara Hannigan and Christoph Eschenbach are principal guest conductors since 2019. Already at the orchestra's very first years, the great Swedish composer Wilhelm Stenhammar was appointed principal conductor, contributing strongly to the Nordic profile of the orchestra by inviting his colleagues Carl Nielsen and Jean Sibelius to conduct their own works. Subsequent holders of the post include Sergiu Comissiona, Sixten Ehrling and Charles Dutoit. During Neeme Järvi's tenure (1982-2004), the orchestra became a major international force. In 1997 it was appointed the National Orchestra of Sweden. During his celebrated tenure as music director (2007-2012), Gustavo Dudamel took the Orchestra to major music centres and festivals in Europe, making acclaimed appearances at BBC Proms and Vienna Musikverein. The list of prominent guest conductors has included Wilhelm Furtwängler, Pierre Monteux, Herbert von Karajan, Myung-Whun Chung, Herbert Blomstedt and Sir Simon Rattle. The orchestra also runs extensive concert projects for children, and regularly releases digital live concerts free on gsoplay.se. The orchestra has been involved in many prestigious recording projects, the latest one the complete Sibelius Symphonies with Santtu-Matias Rouvali for Alpha Classics. Earlier, the orchestra has issued over 100 recordings on BIS, Deutsche Grammophon, Chandos, Farao Classics and several other labels. The Gothenburg Symphony is owned by the Region Västra Götaland.
Joana Carneiro conductor
Ej Fastställd ej fastställd
Ej Fastställd2 ej fastställd
Göteborgs Symfoniska Kör soloist
The choir was founded in 1917 by cousins Elsa and Wilhelm Stenhammar. Elsa Stenhammar was one of the driving forces in turn-of-the-century choir life in Gothenburg and became the choir's first rehearser. On December 8, 1917, the choir debuted in Beethoven's Choir Fantasy with Wilhelm Stenhammar as soloist at the grand piano. As the country's oldest symphonic choir, they were able to celebrate their 100th anniversary in 2017 with a big celebratory concert where Mozart and Brahms as well as Stenhammar, Elfrida Andrée and Björn & Benny were on the program. The Gothenburg Symphony Choir is a non-profit association that is linked to the Gothenburg Symphony. The choir participates in concerts and performances under both the orchestra's and its own auspices. The music is mixed and the repertoire extensive. The Gothenburg Symphony Choir has participated in concerts in, among other places, the Royal Albert Hall and Canterbury Cathedral in England, as well as participated with the Gothenburg Symphony in the annual music festival in the Canary Islands and on a tour to China.