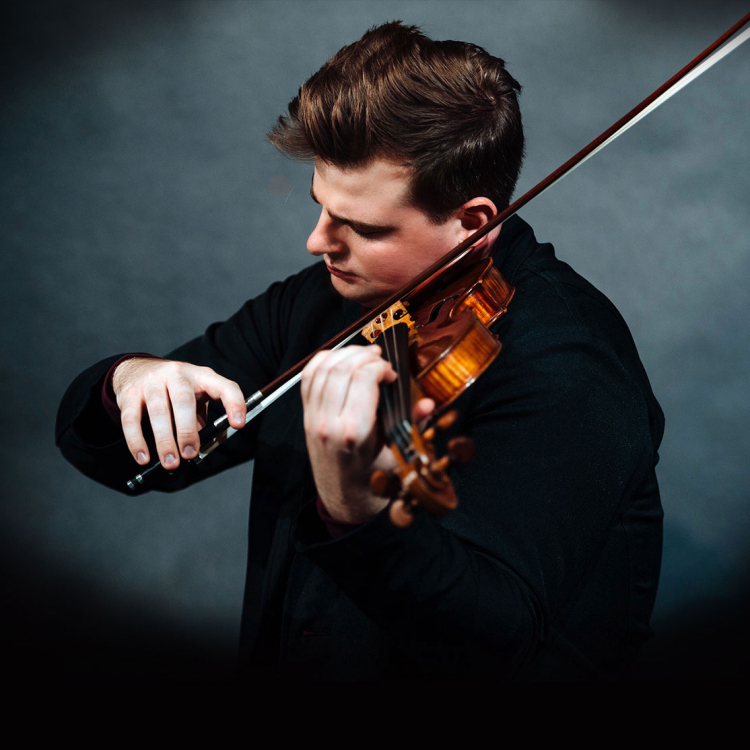 American violinist Chad Hoopes, born in 1994, has been praised for his enormous talent and magical tone. Since winning first prize in the Young Artists Division of the Yehudi Menuhin International Violin Competition, Chad Hoopes has the world at his feet.

The young conductor Tarmo Peltokoski from Vaasa, Finland got the dream job as a 21-year-old when he was appointed first chief conductor of the Deutsche Kammerphilharmonie in Bremen earlier this year. He was recently appointed chief conductor of the Latvian National Orchestra in Riga and he has made famous appearances for, among others, our chief conductor Santtu-Matias Rouvali in Paris. At the same time, he works side by side with Sakari Oramo at the Sibelius Academy.

Erich Wolfgang Korngold’s Violin Concerto offers a cinematic emotional register that clearly points out why Korngold became Hollywood’s darling in the 1930s. Dmitri Shostakovich’ 5th throws you straight into political history. This was the symphony that became the Soviet artist’s famous “creative reply to justified criticism”, supervised by Stalin.

The opening number of this summer concert with the Gothenburg Symphony Orchestra will be a real British classic, one of Ralph Vaughan Williams’ most played and beloved works that embeds you in soft strings.

A late summer evening that won’t be forgotten.

“Watch out- here comes a genius!… Peltokoski not only has phenomenal technique, but an energy, a musical instinct, a stylistic and expressive clarity as well as fiery dynamics, all of which leave one speechless.” Diapason Magazine 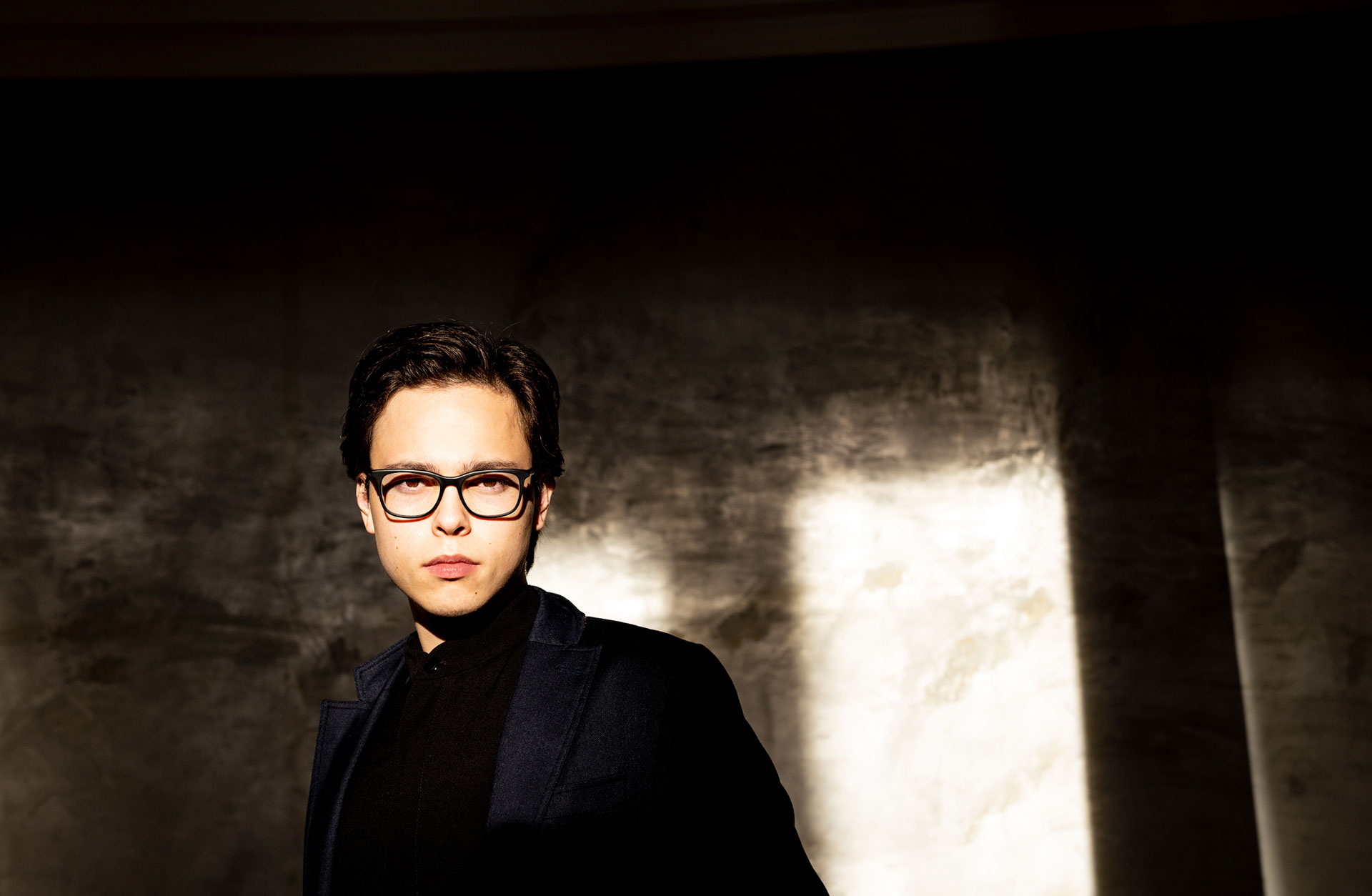 Vaughan Williams Fantasia on a Theme by Thomas Tallis 16 min
RALPH VAUGHAN WILLIAMS (1872-1958) Fantasia on a Theme by Thomas Tallis Fantasia on a Theme by Thomas Tallis is based on a hymn by perhaps the foremost composer of the Tudor era, Thomas Tallis (circa 1505-1585). Ralph Vaughan Williams found Tallis' hymn when he edited The English Hymnal in 1906. The peculiar modal characteristics of the hymn created the mixture of medieval and modern timbres that are the work's hallmark. The piece was first performed in 1910 at the Three Choirs Festival in Gloucester Cathedral. It is scored for two string orchestras, one functioning as a distant chorus and one as a string quartet, with masterfully executed counterpoint. In 2020, Vaughan Williams' Tallis Fantasia was in the UK's Top Five list of the best classical pieces of all time, in a poll conducted by the Classic FM radio channel.
Korngold Violin Concerto 25 min
Erich Wolfgang Korngold was called to Hollywood to help with the musical arrangements for Max Reinhardt's film adaptation of A Midsummer Night's Dream. Film music brought him wealth, film awards and fame, but it also meant that the concert institutions began to lose interest in him. He was no longer "serious". Korngold was sensitive to criticism and devoted his last twelve years exclusively to art music. In the summer of 1945 he worked on his violin concerto. The premiere in St. Louis on February 15, 1947 was performed by Jascha Heifetz. The concert, which was also dedicated to Gustav Mahler's widow Alma, was a great success and was soon played in many concert halls. In the violin concerto you can find themes from four of Korngold's films. The main theme of the second movement comes from Anthony Adverse (1936), a film score that earned Korngold an Oscar. The finale begins with lively staccato playing and ends with a brilliant virtuoso climax, all built on the bright and shiny main theme from the 1937 film The Prince and the Pauper. The way of working says something about the importance Korngold gave to his film music, and what quality it has.
Intermission 25 min
Shostakovich Symphony No 5 47 min
A devastatingly critical article was published in Pravda magazine in 1936 about Shostakovich's opera Lady Macbeth of Mtsensk, which was described as "unsoviet, coarse, primitive and vulgar". The article coincided in time with Stalin's great purges, which also affected cultural policy. Shostakovich was caught in the cold and felt compelled to withdraw his newly written, dissonant Mahler-inspired Fourth Symphony. Instead, he made a scrap, and wrote the more easy-to-listen Fifth Symphony presented as "A Soviet Artist's Answer to Fair Criticism". The symphony follows the classical four-movement structure and has the same pattern as Beethoven's symphony of the same number. The work begins in tragic minor, but ends in sonorous major. As is customary with Shostakovich's music, it contains several different aspects, partly an arranged exterior that ostensibly celebrates communism, partly hidden themes that reflect more of his innermost thoughts and feelings. In the finale, Shostakovich's personal feelings and his public and social situation are finally intertwined. The theme is taken from a song he composed for a poem by Pushkin, Rebirth, composed just before the symphony. The text is about how the work of artistic genius is painted over with black brushstrokes by an insensitive "artist-barbarian", but emerges again clearly when the black paint peels off.

Gothenburg Symphony Orchestra
The Gothenburg Symphony, called "one of the world's most formidable orchestras" by the Guardian, has toured the USA, Europe, Japan and the Far East and performed at major music centres and festivals throughout the world. Chief conductor is Santtu-Matias Rouvali who started his tenure in 2017. Barbara Hannigan and Christoph Eschenbach are principal guest conductors since 2019. Already at the orchestra's very first years, the great Swedish composer Wilhelm Stenhammar was appointed principal conductor, contributing strongly to the Nordic profile of the orchestra by inviting his colleagues Carl Nielsen and Jean Sibelius to conduct their own works. Subsequent holders of the post include Sergiu Comissiona, Sixten Ehrling and Charles Dutoit. During Neeme Järvi's tenure (1982-2004), the orchestra became a major international force. In 1997 it was appointed the National Orchestra of Sweden. During his celebrated tenure as music director (2007-2012), Gustavo Dudamel took the Orchestra to major music centres and festivals in Europe, making acclaimed appearances at BBC Proms and Vienna Musikverein. The list of prominent guest conductors has included Wilhelm Furtwängler, Pierre Monteux, Herbert von Karajan, Myung-Whun Chung, Herbert Blomstedt and Sir Simon Rattle. The orchestra also runs extensive concert projects for children, and regularly releases digital live concerts free on gsoplay.se. The orchestra has been involved in many prestigious recording projects, the latest one the complete Sibelius Symphonies with Santtu-Matias Rouvali for Alpha Classics. Earlier, the orchestra has issued over 100 recordings on BIS, Deutsche Grammophon, Chandos, Farao Classics and several other labels. The Gothenburg Symphony is owned by the Region Västra Götaland.
Tarmo Peltokoski conductor
Tarmo Peltokoski from Vaasa, Finland got his dream job at the age of 21 when he earlier this year was appointed first guest conductor of the Deutsche Kammerphilharmonie in Bremen after only two guest appearances with the orchestra. Peltokoski began his conducting studies with Professor Emeritus Jorma Panula at the age of 14 and currently studies with Sakari Oramo at the Sibelius Academy. He has also been taught by Hannu Lintu and Jukka-Pekka Saraste. Tarmo Peltokoski is also a celebrated pianist and studies piano at the Sibelius Academy with Antti Hotti. He has appeared as a soloist with all major Finnish orchestras, including the Finnish Radio Symphony, the Helsinki and Tampere Philharmonic and the Oulu Symphony. He has performed concerts and chamber music at the Åbo and St. Michels festivals.
Chad Hoopes violin