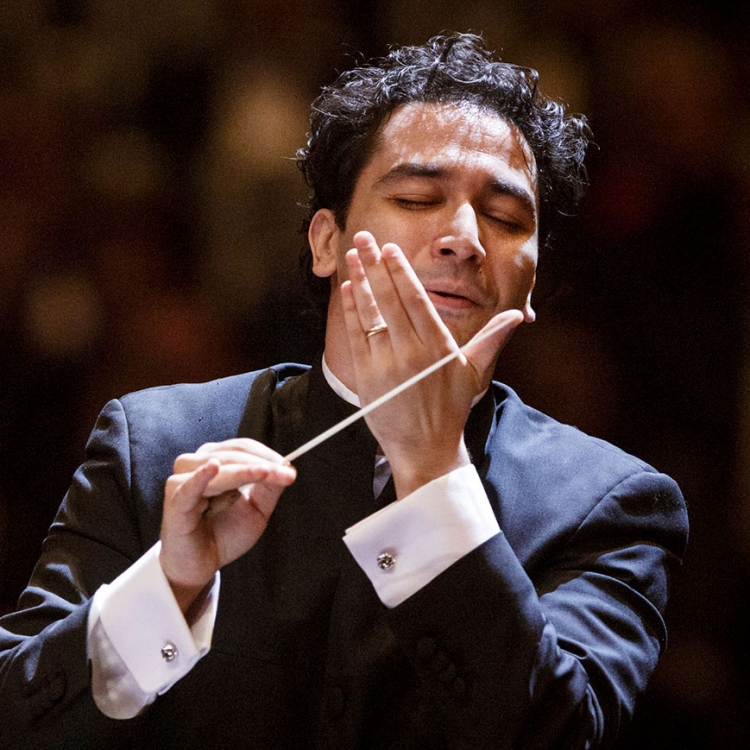 When conductor Andrés Orozco-Estrada met the Gothenburg Symphony for the first time in 2013, it was a raging success. Göteborgs-Posten’s review called him “a phenomenal young artist… musically absolutely splendid,” and following concerts in Stockholm and Helsinki, a second invitation was highly anticipated. But the rest of the world had also discovered Andrés Orozco-Estrada, and as he is music director in Houston and chief conductor in Frankfurt, his schedule has been full.

So we’re particularly pleased to welcome him back again in Richard Strauss’ splendidly virtuosic A Hero’s Life, a wonderfully self-obsessed hero’s tale in which Richard Strauss depicts friends and enemies, fights and peace with a great deal of humour.

Another “phenomenal artist” is violist Lawrence Power, a leading viola soloist. James MacMillan’s resonant viola concerto was dedicated to him, and after the first performance with the London Philharmonic in 2014, the Guardian wrote “A major contribution to the repertory… Lawrence Power looked as if he adored playing it.”

MacMillan Viola Concerto 31 min
My viola concerto was written in 2013 and is dedicated to the soloist Lawrence Power. It is composed in three movements. The first movement is based on a simple cadential figure, sounding as if it is a standard tonic/dominant statement, but is undermined by foreign notes in the bass which create a sense of unresolved tension. From this grows a lyrical and expressive line for the soloist, always underpinned by the two note/two chord tread in the accompaniment. A metric modulation heralds the transition to the second main idea. Oboe and cor anglais play tentative fragments in a faster pace, and this leads to a dance-like theme on the brass. This in turn sends the soloist off on a new, terse little tune in semi quavers, low on the instrument. A lot of the accompaniment from here is carried by a quartet of two violas and two cellos, sometimes with a 'walking' solo bass. The quartet sometimes has an archaic quality, like a consort of viols. After a development of these elements the original cantabile theme returns, but within a very different accompanying context. The original key is reached again, but using the second idea as a coda. The second movement begins with an outburst in brass, woodwind and percussion. From this emerges a dreamy, muted string tread - a soft cushion of sound on which sits the song-like viola theme. The idea of the two adjacent notes, which dominated the first movement, is now back as a shaping ingredient in the melodic material of this movement too. There is a subliminal hymn-like quality to this music which is made more explicit when the oboe enters in counterpoint to the solo line. The first section is completed with another outburst and settles to the second main paragraph, where the lyrical material is now developed. The climax of the work involves a third, more extended version of the opening violence, but gives way to a serene and mysterious fading away. The character of the last movement is joyful, humorous and fast. It involves the soloist in a playful interplay with the string section, answered eventually by a simple rhythmic episode on woodwind and brass. Something approaching an accompanied cadenza follows this, but the solo line is shaped by a new take on the 2 note leitmotiv. This time its melody is dominated by close minor seconds on double-stops. The strings have a chordal sequence against this, which implodes rhythmically. Variations of these ideas then wind down to a tranquil middle section where the 'viol quartet' comes back as the principal accompaniment. Also prominent here is a solo flute which nods towards the influence of the Japanese shakuhachi. Eventually the playfulness returns with added wind and tuned percussion and we hear the main ideas in new guises. Some of the most virtuosic solo music is reserved for the final few moments of the work. James MacMillan, 2014
Intermission 25 min
R Strauss Ein Heldenleben 47 min

Gothenburg Symphony Orchestra
The Gothenburg Symphony, called "one of the world's most formidable orchestras" by the Guardian, has toured the USA, Europe, Japan and the Far East and performed at major music centres and festivals throughout the world. Chief conductor is Santtu-Matias Rouvali who started his tenure in 2017. Kent Nagano has been principal guest conductor since 2013. Already at the orchestra's very first years, the great Swedish composer Wilhelm Stenhammar was appointed principal conductor, contributing strongly to the Nordic profile of the orchestra by inviting his colleagues Carl Nielsen and Jean Sibelius to conduct their own works. Subsequent holders of the post include Sergiu Comissiona, Sixten Ehrling and Charles Dutoit. During Neeme Järvi's tenure (1982-2004), the orchestra became a major international force. In 1997 it was appointed the National Orchestra of Sweden. The list of prominent guest conductors has included Wilhelm Furtwängler, Pierre Monteux, Herbert von Karajan, Myung-Whun Chung, Herbert Blomstedt and Sir Simon Rattle. The orchestra also runs extensive concert projects for children, and regularly releases digital live concerts free on www.gsoplay.se. The orchestra has issued over 100 recordings on BIS, Deutsche Grammophon, Chandos, Farao Classics and several other labels, including the complete orchestral music by Grieg and the complete symphonies of Sibelius, Nielsen, Stenhammar and Atterberg, and most recently orchestral music by Richard Strauss. The Gothenburg Symphony is owned by the Region Västra Götaland. www.gso.se
Andrés Orozco-Estrada conductor
Lawrence Power viola