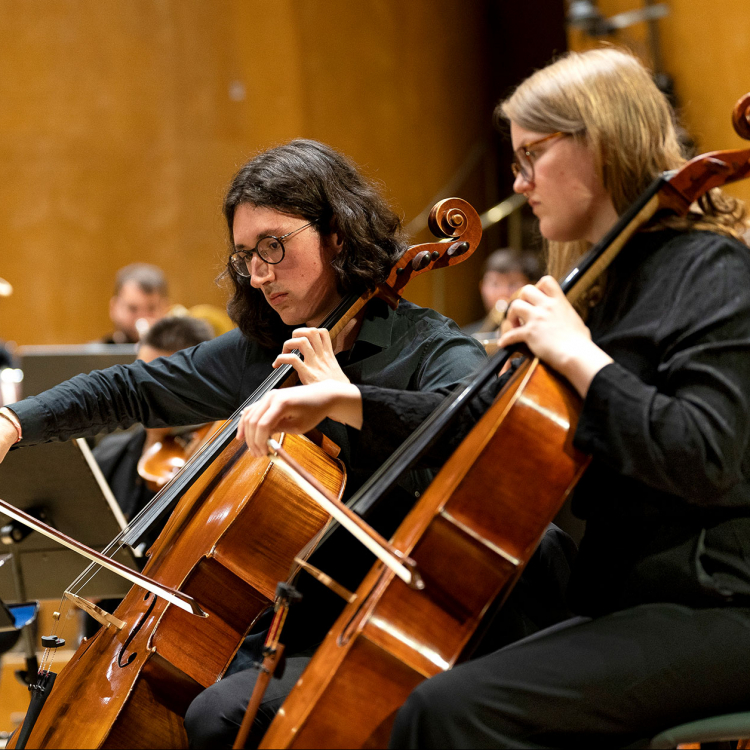 Experience the young musicians from the master’s programme at the Academy of Music and Drama.

Dijk Uvertyr i d-moll 8 min
Mahler Symphony No. 5 1 h 12 min
Gustav Mahler (1860-1911) Symphony No. 5 in C-sharp minor Trauermarsch. In gemessenem Schritt. Streng. Wie ein Kondukt Stürmisch bewegt. Mit grösster Vehemenz. Scherzo. Kräftig, nicht zu schnell Adagietto. Sehr langsam Rondo-Finale. Allegro. Allegro giocoso. Frisch Let us begin in the middle of Mahler's symphony, in the renowned adagietto. No, it is not the middle in terms of length, as it is preceded by three longer movements and followed by an equally extensive finale. The symphony is also characterised by strict symmetry, with the first two movements placed together as a slow introduction and a quick primary movement, followed by a scherzo (the formal centre of the symphony), and then the adagietto, which leads to the rapid finale. But many listeners still consider the famous movement to be an emotional peak, and there are also links that run both backwards and forwards. Because of course, music can be emotionally charged even if the thematic connections are not clearly heard. Emotions may even develop increasing prominence when the listener is not truly aware of them. The philosopher Theodor W. Adorno, who often has surly comments in his back pocket, writes in his dense book on Mahler that it "borders on genre prettiness through its ingratiating sound". When Luigi Visconti chose this movement as a central musical element in his movie Death in Venice (after the novel by Thomas Mann, but with a composer, rather than a writer, in the tragic lead role), this prettiness turned sickly. The image has such power that it is difficult not to see in the mind's eye when the music stands alone once again. It has been called a "song without words" (after Mendelssohn's piano genre), and Mahler even returns to the Rückert song Ich bin der Welt abhanden gekommen. This already causes the rigid distinction that is often drawn between the "Wunderhorn symphonies" (no. 2-4, all with material from Mahler's Wunderhorn songs) and the "abstract" fifth symphony to fall apart. In fact, Mahler evidently gave his future wife Alma the movement as a gift of love - instead of a letter. But the road to the adagietto is long. First there is a funeral march with two trios that hardly lighten the dense mood; then comes a passionate burst of anguish, which does however provide unexpected space for light in a chorale. To be sure, this breakthrough has no direct repercussions, because the conclusion returns to a minor key, but the light does prevail later in the symphony. This occurs first in the various swirling dances of the scherzo, in which the sumptuous form includes two trios and an implementation, and then in the third section as well. The adagio is followed by a conclusion that Mahler called a rondo, but which others have tried to interpret as a blend of rondo (in which a principal theme is interrupted by different contrasting episodes) and a sonata form (with the presentation of a theme, development and a reprise). It should be no surprise here if reminiscences from the previous movement appear - although the yearning eroticism has now become a feathery-light affirmation. And that is precisely what this movement is: a "yes" to life. Erik Wallrup