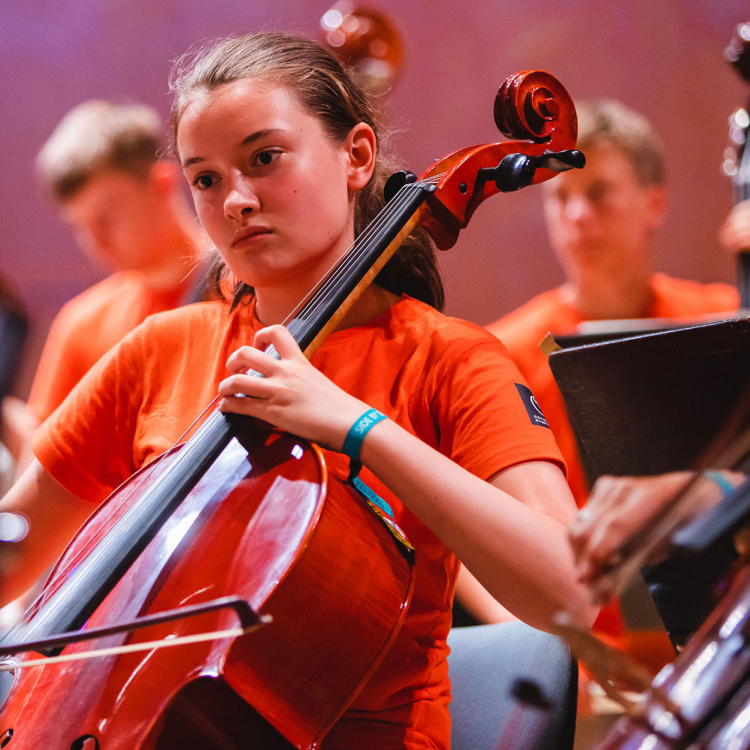 Göteborgs Konserthus Side by Side 2023: Closing Concert

2023 the youth music camp Side by Side celebrates 10 years! The camp’s closing concert is a magnificent musical experience as the camp’s most talented participants play and sing alongside the Gothenburg Symphony Orchestra and Vocal Ensemble.

2023 the youth music camp Side by Side celebrates 10 years! The anniversary camp’s closing concert is a magnificent musical experience, with Side by Side’s most talented participants performing symphonic music alongside the Gothenburg Symphony Orchestra and Vocal Ensemble. An opportunity to hear tomorrow’s virtuosos today!

Side by Side is an international music camp organized by the Gothenburg Symphony Orchestra, for children and young aged 6-23. Through music we build bridges between people, cultures and continents! The camp runs from 17-21 June 2023.

Holst The Planets - Jupiter 8 min
Stenhammar Interlude from the cantata Sången 5 min
Alfvén Festspel 6 min
Intermission 25 min
Andrea Tarrodi Festouvertyr 4 min
Lili Boulanger D'un matin de printemps 5 min
L-E Larsson Pastoral Suite: Romance 5 min
Mendoza Guerra de Secciones 10 min
Fauré Pavane 7 min
Shostakovich Symphony No 5 - Allegro non troppo 10 min
A devastatingly critical article was published in Pravda magazine in 1936 about Shostakovich's opera Lady Macbeth of Mtsensk, which was described as "unsoviet, coarse, primitive and vulgar". The article coincided in time with Stalin's great purges, which also affected cultural policy. Shostakovich was caught in the cold and felt compelled to withdraw his newly written, dissonant Mahler-inspired Fourth Symphony. Instead, he made a scrap, and wrote the more easy-to-listen Fifth Symphony presented as "A Soviet Artist's Answer to Fair Criticism". The symphony follows the classical four-movement structure and has the same pattern as Beethoven's symphony of the same number. The work begins in tragic minor, but ends in sonorous major. As is customary with Shostakovich's music, it contains several different aspects, partly an arranged exterior that ostensibly celebrates communism, partly hidden themes that reflect more of his innermost thoughts and feelings. In the finale, Shostakovich's personal feelings and his public and social situation are finally intertwined. The theme is taken from a song he composed for a poem by Pushkin, Rebirth, composed just before the symphony. The text is about how the work of artistic genius is painted over with black brushstrokes by an insensitive "artist-barbarian", but emerges again clearly when the black paint peels off.
Wednesday 21 June 2023: The event ends at approx. 19.30

Gothenburg Symphony Orchestra
The Gothenburg Symphony, called "one of the world's most formidable orchestras" by the Guardian, has toured the USA, Europe, Japan and the Far East and performed at major music centres and festivals throughout the world. Chief conductor is Santtu-Matias Rouvali who started his tenure in 2017. Barbara Hannigan and Christoph Eschenbach are principal guest conductors since 2019. Already at the orchestra's very first years, the great Swedish composer Wilhelm Stenhammar was appointed principal conductor, contributing strongly to the Nordic profile of the orchestra by inviting his colleagues Carl Nielsen and Jean Sibelius to conduct their own works. Subsequent holders of the post include Sergiu Comissiona, Sixten Ehrling and Charles Dutoit. During Neeme Järvi's tenure (1982-2004), the orchestra became a major international force. In 1997 it was appointed the National Orchestra of Sweden. During his celebrated tenure as music director (2007-2012), Gustavo Dudamel took the Orchestra to major music centres and festivals in Europe, making acclaimed appearances at BBC Proms and Vienna Musikverein. The list of prominent guest conductors has included Wilhelm Furtwängler, Pierre Monteux, Herbert von Karajan, Myung-Whun Chung, Herbert Blomstedt and Sir Simon Rattle. The orchestra also runs extensive concert projects for children, and regularly releases digital live concerts free on gsoplay.se. The orchestra has been involved in many prestigious recording projects, the latest one the complete Sibelius Symphonies with Santtu-Matias Rouvali for Alpha Classics. Earlier, the orchestra has issued over 100 recordings on BIS, Deutsche Grammophon, Chandos, Farao Classics and several other labels. The Gothenburg Symphony is owned by the Region Västra Götaland.
Manuel López Gómez conductor
Deltagare från musiklägret Side by Side soloist
Göteborgs Symfonikers Vokalensemble ensemble
Daniela Musca conductor