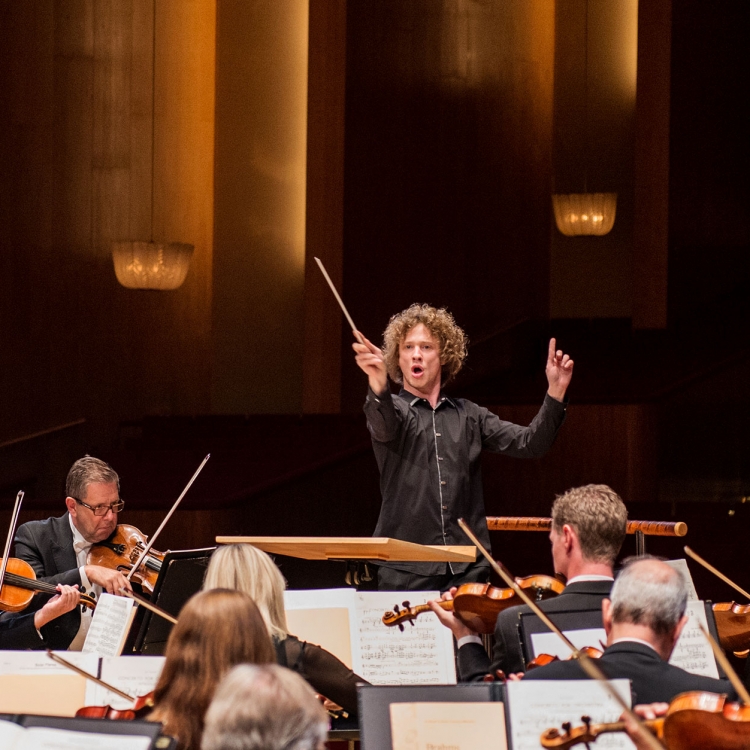 Part three of our season opening, with Chief Conductor Santtu Matias Rouvali, this time joined by distinguished violinist Vadim Gluzman as a guest soloist. The talented Israeli plays Peteris Vasks’ Violin Concerto No.1 Distant Light for us. Vasks composed the concerto for his friend, violin player Gidon Kremer, after being inspired by the latter’s book Fragments of Childhood: “The moods evoked by its pages were a crucial influence as I composed the concerto.” Peteris Vasks’ music is often highly personal and tinged with melancholy and suffering, but also hope and faith in the future.

The season opening concert on Thursday 9 September with pianist Yuja Wang is livestreamed on GSOplay. 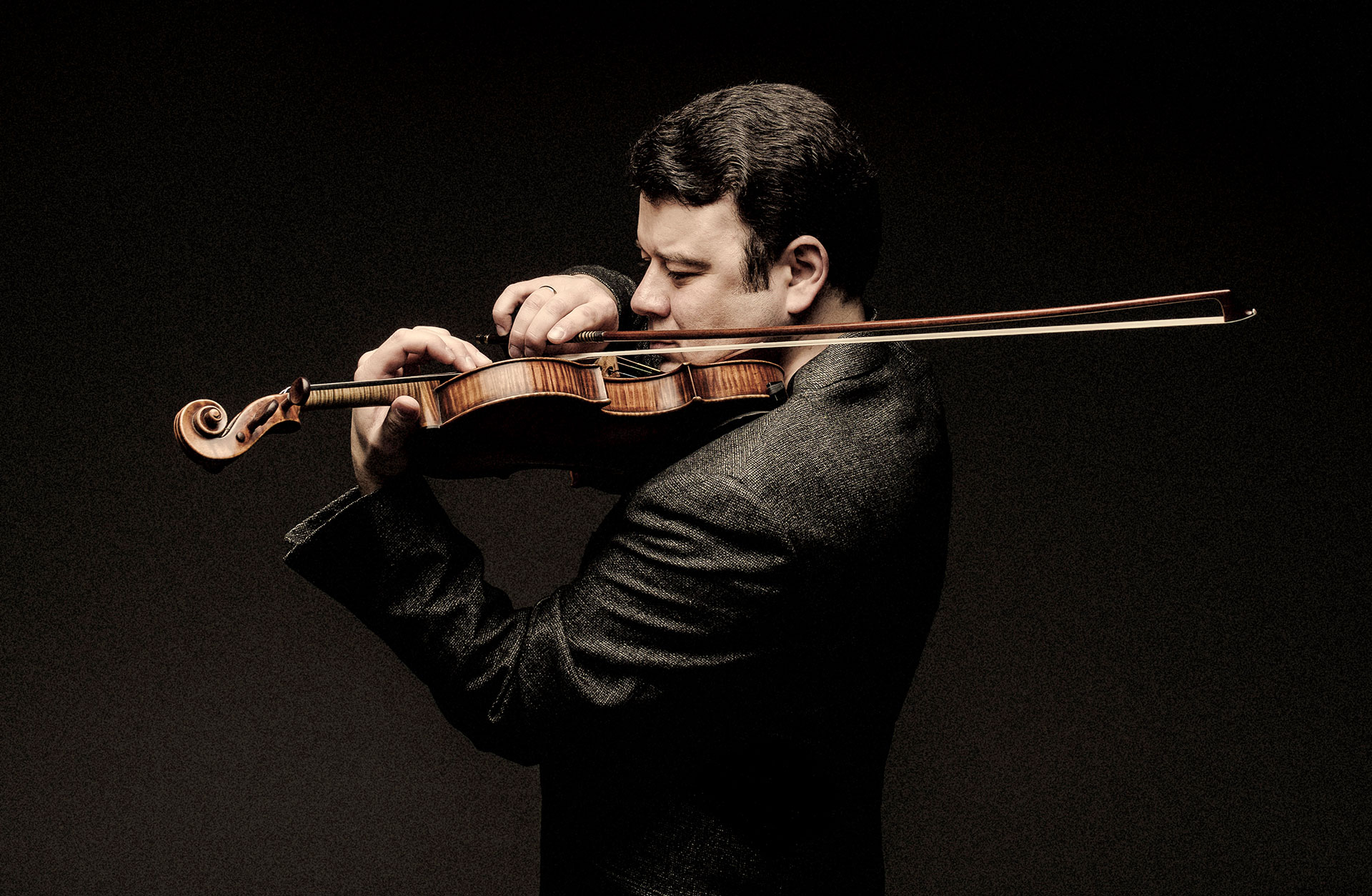 The concert begins with Carl Nielsen’s Saga Dream, an evocative and spot-on title for this musical embodiment depiction of fairy-tale hero Gunnar and his dream of a better world for mankind. And of course, no programme of music from the Baltic Sea region would be complete without Sibelius. His Symphony No.3 joyfully embraces listeners, albeit so unassumingly and gently we hardly notice it at times… until the blazing rays of the finale’s sun blind us with their entrancingly rhythmic dance.

Nielsen Saga-Drøm 11 min
Vasks Violin Concerto No .1 "Distant lLight" 30 min
In the years before writing “Tala gaisma” (Distant Lights), I had often thought about writing a large-scale work for violin, especially after completing my cello concerto. In summer 1996 Gidon Kremer asked me to write a violin concerto for the newly founded youth orchestra for the Baltic countries “Kremerata Baltica”. During this time I was reading Gidon Kremer’s book “Moments from Childhood”. The moods of this book have been a major influence on this concerto. I started writing in autumn 1996 and finished the 30-minute-work in spring the following year. The concerto is in one long movement, with contrasting episodes and three cadenzas for the soloist. The main theme comes from silence and returns to silence, full of idealism and love, sometimes melancholic and dramatic. The first notes grow slowly, without hurry; then, the light-sad cantilena sets in. After Cadenza I, an extensive theme starts with low bass chords gradually gaining strength and intensity. With a sudden change of tempo and character the following episode begins; in it, I used a musical language which is close to Latvian folk music. Candenza II brings into the music a slight different character which disappears in an energetic tutti. After this burst of energy, silence returns. The lyrical violin line leads to a second, dramatic episode. Cadenza III and the following aleatoric part form the centre of the concerto. The aleatoric chaos is interrupted by a robust, even agreesive waltz rhythm. In the recapitulation the musical ideas of the opening return. Although there is a sound of hurt for a second, the concerto dies away in bright sadness. Once again, the waltz sounds – now as a reflection of distant memories. “Tala gaisma” is dedicated to Gidon Kremer, my former classmate, whom I met again through music. The concerto is a commission from the Salzburg Festival and was premiered on 10 August 1997 with Gidon Kremer and the Kremerata Baltica conducted by Saulius Sondeckis. - Peteris Vasks
Sibelius Symphony No 3 30 min

Gothenburg Symphony Orchestra
The Gothenburg Symphony, called "one of the world's most formidable orchestras" by the Guardian, has toured the USA, Europe, Japan and the Far East and performed at major music centres and festivals throughout the world. Chief conductor is Santtu-Matias Rouvali who started his tenure in 2017. Barbara Hannigan and Christoph Eschenbach are principal guest conductors since 2019. Already at the orchestra's very first years, the great Swedish composer Wilhelm Stenhammar was appointed principal conductor, contributing strongly to the Nordic profile of the orchestra by inviting his colleagues Carl Nielsen and Jean Sibelius to conduct their own works. Subsequent holders of the post include Sergiu Comissiona, Sixten Ehrling and Charles Dutoit. During Neeme Järvi's tenure (1982-2004), the orchestra became a major international force. In 1997 it was appointed the National Orchestra of Sweden. During his celebrated tenure as music director (2007-2012), Gustavo Dudamel took the Orchestra to major music centres and festivals in Europe, making acclaimed appearances at BBC Proms and Vienna Musikverein. The list of prominent guest conductors has included Wilhelm Furtwängler, Pierre Monteux, Herbert von Karajan, Myung-Whun Chung, Herbert Blomstedt and Sir Simon Rattle. The orchestra also runs extensive concert projects for children, and regularly releases digital live concerts free on gsoplay.se. The orchestra has been involved in many prestigious recording projects, the latest one the complete Sibelius Symphonies with Santtu-Matias Rouvali for Alpha Classics. Earlier, the orchestra has issued over 100 recordings on BIS, Deutsche Grammophon, Chandos, Farao Classics and several other labels. The Gothenburg Symphony is owned by the Region Västra Götaland.
Santtu-Matias Rouvali conductor
Hailed by The Guardian as "the latest sit-up-and-listen talent to emerge from the great Finnish conducting tradition," the 2018/19 season will see Santtu-Matias Rouvali continuing his positions as Chief Conductor of the Gothenburg Symphony and Principal Guest Conductor of the Philharmonia Orchestra, alongside his longstanding Chief Conductor-ship with the Tampere Philharmonic Orchestra close to his home in Finland. Rouvali has regular relationships with several orchestras across Europe, including the Orchestre Philharmonique de Radio France, Oslo Philharmonic Orchestra, Bamberger Symphoniker and the Deutsches Symphonie-Orchester Berlin. As well as making his debut with the Münchner Philharmoniker this season, he also returns to North America for concerts with the Minnesota Orchestra and Detroit Symphony Orchestra. Following a very successful Nordic tour with Hélène Grimaud last season, the Gothenburg Symphony is back on the road in February 2019 for a tour hitting major centres in Germany and Austria with pianist Alice Sara Ott, and percussionist Martin Grubinger who premieres a new percussion concert by Daníel Bjarnason. Rouvali looks forward to other ambitious touring projects with his orchestras in the future, including appearances in North America and Japan. In addition to the extensive tour, Rouvali's season in Gothenburg opens with Strauss' Alpine Symphony accompanied by Víkingur Ólafsson Mozart Piano Concerto No.24, and he looks forward to collaborations with Janine Jansen, Patricia Kopatchinskaja and Baiba Skride throughout the rest of the season. As another cornerstone to his tenure in Gothenburg, he is adding his mark to the Orchestra's impressive recording legacy. In partnership with Tampere Philharmonic Orchestra and violinist Baiba Skride, a recording featuring concertos from Bernstein, Korngold and Rozsa is released in autumn 2018.This continues his great collaboration with Baiba Skride following their hugely successful recording of Nielsen and Sibelius' violin concertos with the Tampere Philharmonic Orchestra in summer 2015. Rouvali has been Artistic Director and Chief Conductor of the Tampere Philharmonic Orchestra since 2013. Highlights of the tenure so far include a Sibelius symphony cycle in autumn 2015, and the Orchestra's first tour to Japan in spring 2017 where they were accompanied by an exhibition of original Moomin drawings by Tove Jansson to mark the opening of the new museum at the Tampere Hall. He opens the 2018/19 season with a Beethoven programme with pianist Javier Perianes. Alongside an extremely busy symphonic conducting career, as Chief Conductor in Tampere he has conducted Verdi's La forza del destino and most recently world premiere of Olli Kortekangas's My Brother's Keeper (Veljeni vartija) with Tampere Opera in spring 2018.
Vadim Gluzman violin