The Gothenburg Concert Hall is located by Götaplatsen, at the top of avenue Kungsportsavenyn.

Join us on a tour through all the winding nooks and crannies of the Gothenburg Concert Hall.

The Gothenburg Concert Hall has been adapted to be accessible to everyone. For instance, we have wheelchair spaces in the concert premises and hearing loops with IR transference. 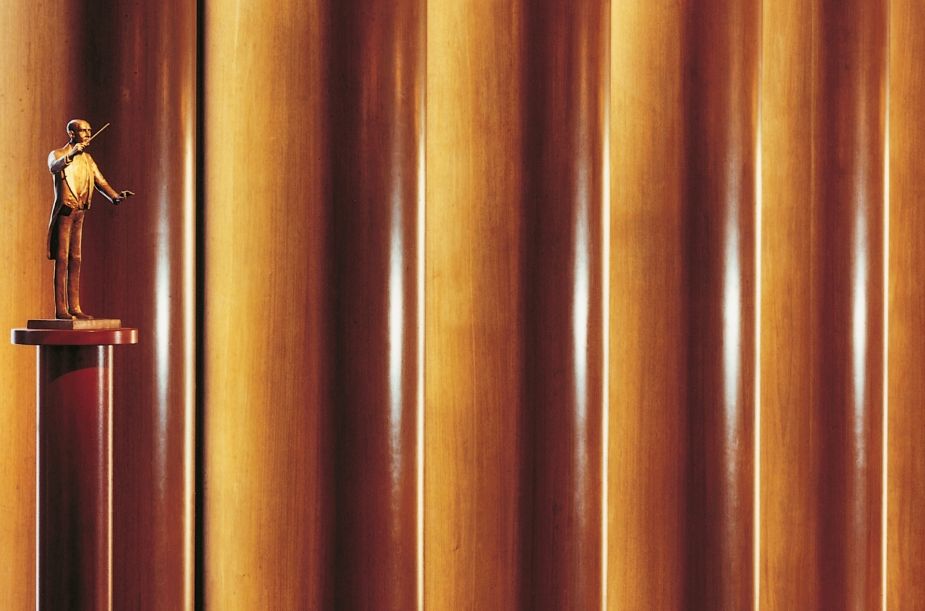 Adorned with works of art

The carpets and furniture fabrics were created by Inga Wedel, and the attractive drinking fountain has been newly produced by Orrefors, following the original plans by Simon Gates. The sculpture above shows composer Wilhelm Stenhammar, chief conductor of the Gothenburg Symphony from 1907 to 1922.

Artist: Sven X-et Erixson, (1899-1970), painter and sculptor. The artist’s pictures have their roots in a naivist and narrative tradition. He became renowned during the 1930s for his colourful depictions of the city and of work. Many of his lithographs received widespread distribution through the publications of Konstfrämjandet, an organisation for the promotion of art, during and after the 1940s. 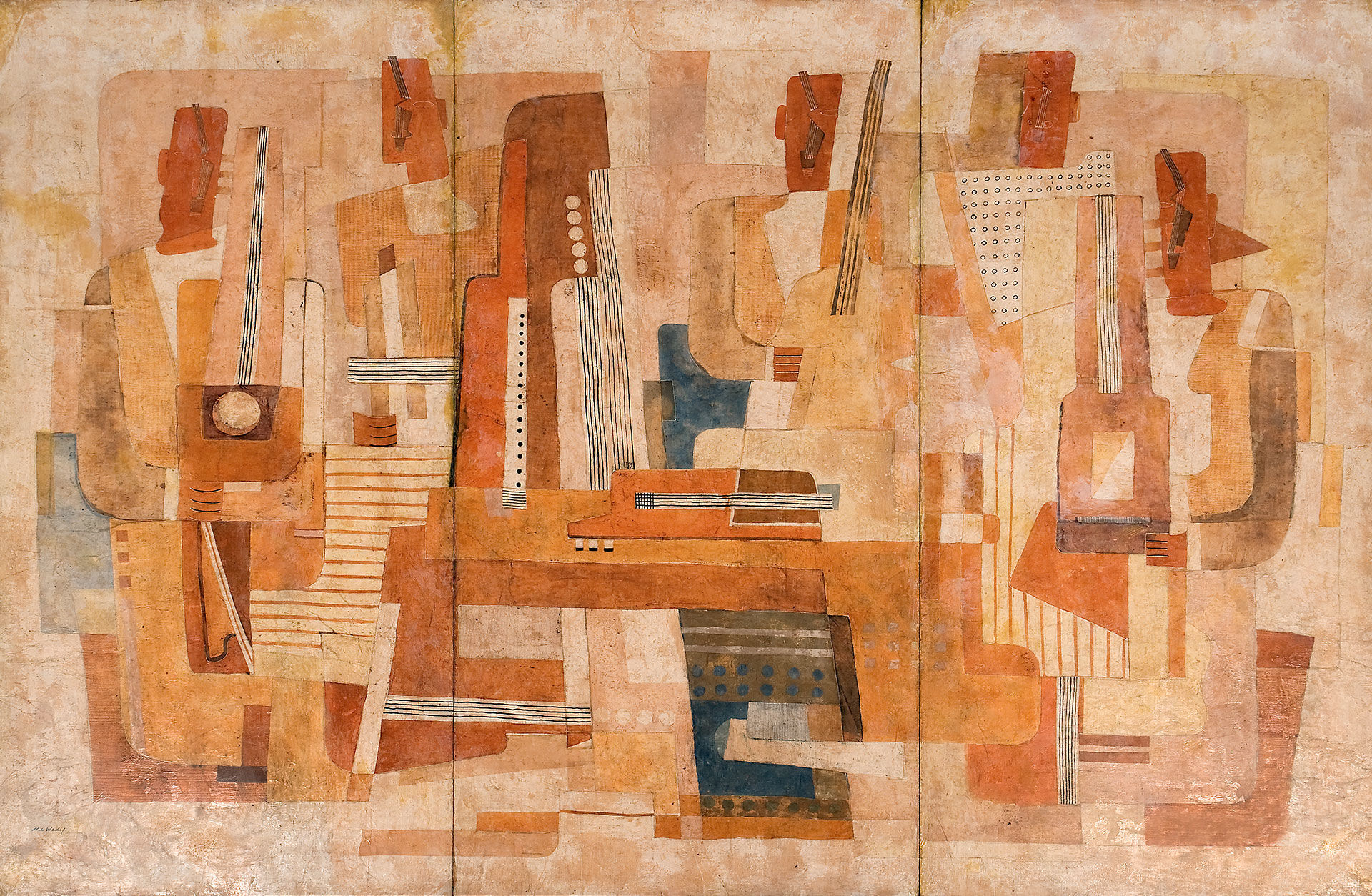 (Musicians), oil painting on panel, 230 x 330 cm, 1938. Donated in 1997 by Sten A. Olsson and the Wedel family. A cubist inspired composition, representing a number of musicians and their instruments. Located in the foyer outside the Stenhammarsalen concert room.

Training: Slöjdföreningens skola (the Handicraft Society’s School), Gothenburg, and Academie Moderne, Paris. Worked as a teacher at Slöjdföreningens skola, 1939-58. Wedel’s pictures were influenced by both Cubism and Surrealism. He made several public works of art, including stairwells. Displayed at the Nationalmuseum (the National Museum in Stockholm), the Gothenburg Museum of Art, and museums in Norrköping, Karlstad and other locations. © Nils Wedel /BUS 2009 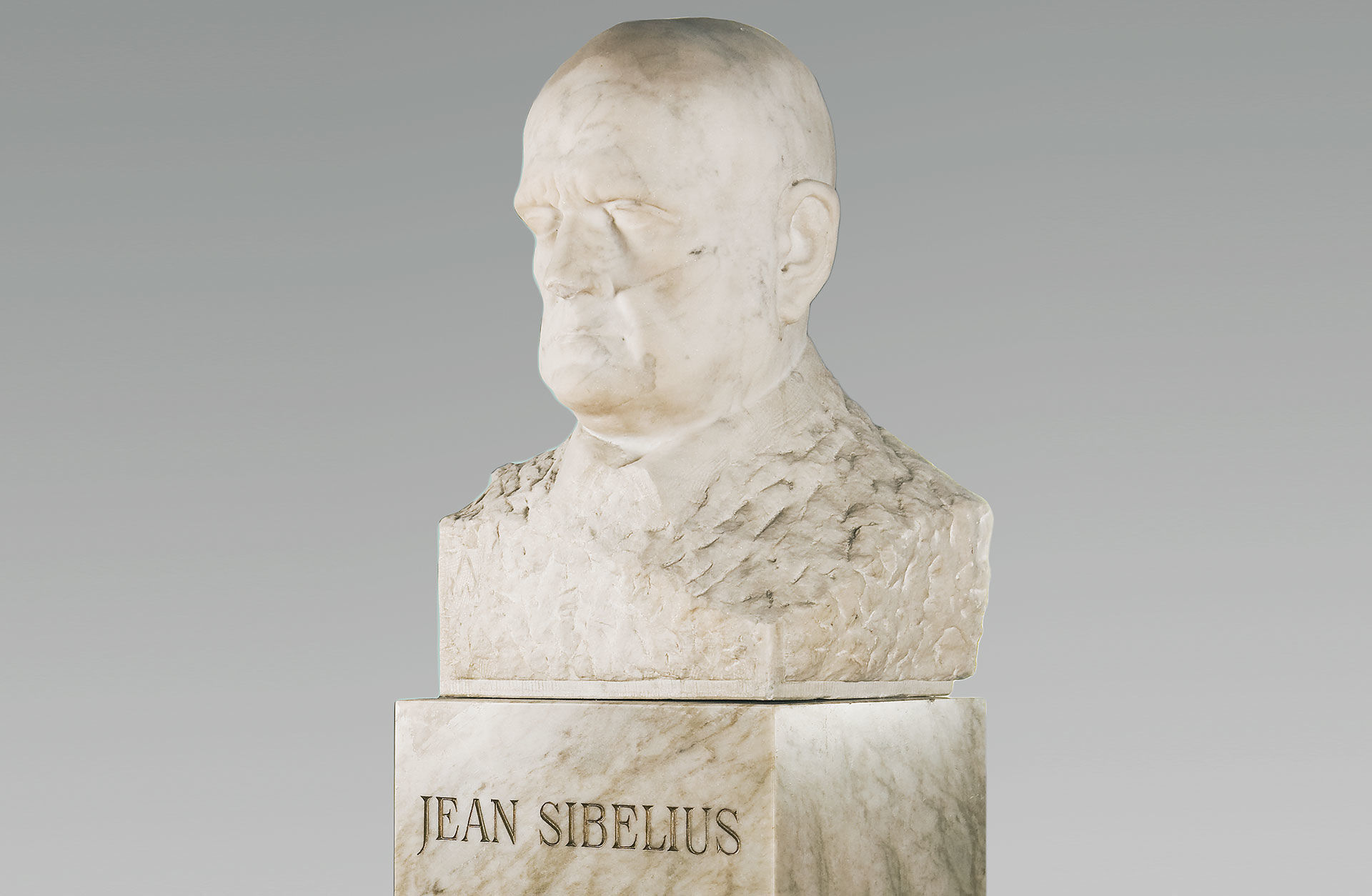 Jean Sibelius (1865-1957) is considered to be one of Finland’s foremost composers. Sibelius composed seven symphonies and several orchestral works. Among his most famous works are “Finlandia”, “The Karelia Suite” and “Valse triste”. He visited Göteborgs orkesterförening (the Gothenburg Orchestra Society) as a conductor during the period that his friend Wilhelm Stenhammar was in charge of the orchestra.

Artist: Wäinö Aaltonen, (1894-1966) sculptor and painter. One of the foremost artists in Finland during the first years of independence. Aaltonen made several large commissioned works, including bronze figures for the Parliament Building in Helsinki during the 1930s. The Wäinö Aaltonen Museum of Art in Turku is the city museum of Turku, and a major part of its collection consists of Aaltonen’s own donation.

There are 11 outdoor sculptures by him in Turku. In Gothenburg, a twin town of Turku, it is possible to see, in addition to this portrait, the monumental sculpture “När vänskapsförbindelser knyts” (When Friendships are Made), located at Näckrosdammen, which represents a young man and a young woman on horseback. A copy of this work was unveiled the same year (1955) in Turku. The work was donated to the twin town as thanks for help during the reconstruction of Turku after the war. © Wäinö Aaltonen /BUS 2009. 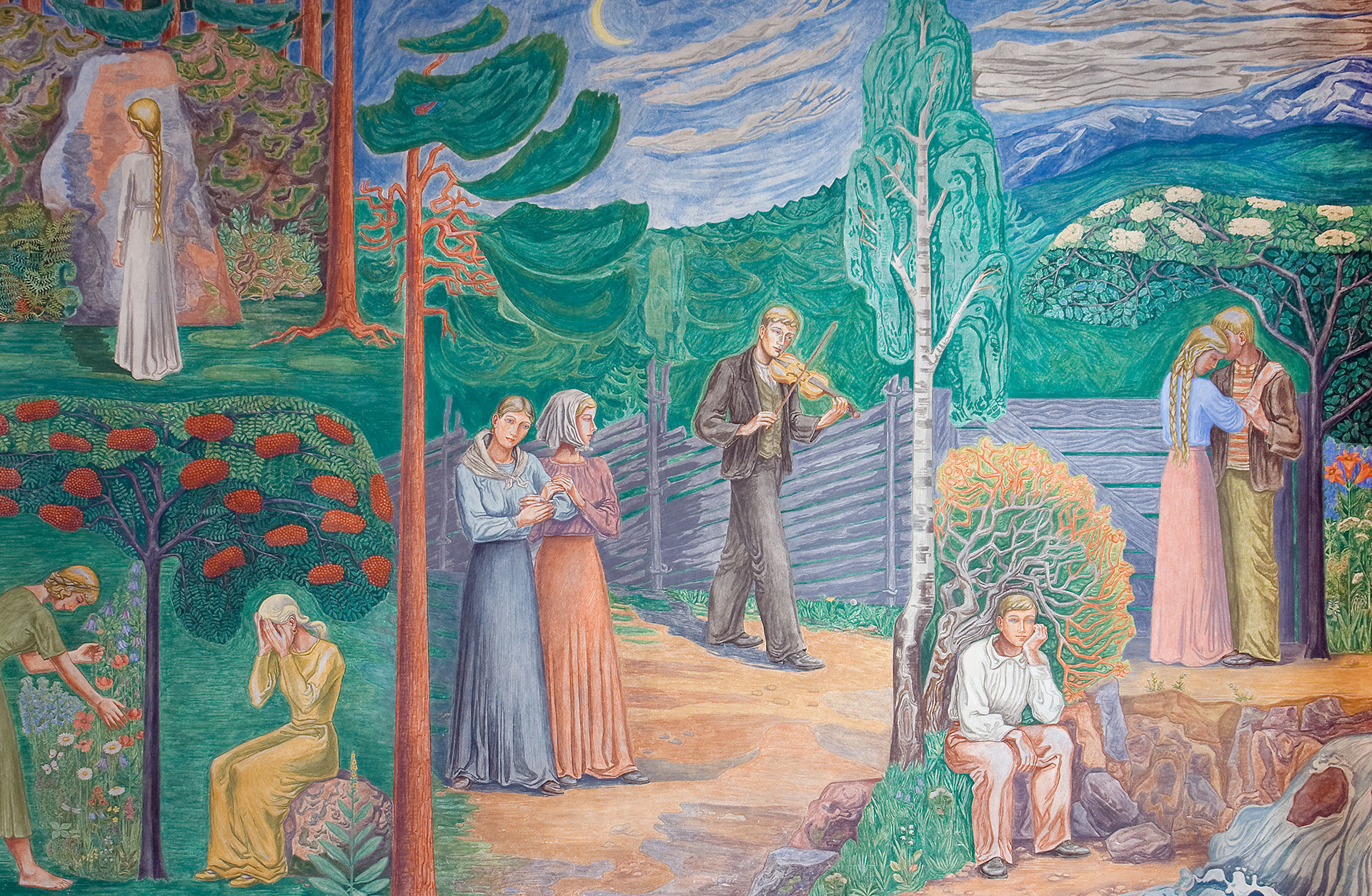 The picture depicts in a few scenes the Nordic landscape and its people. The minor-key music from the player’s fiddle seems to reflect the mood of the people. A young man is sitting and looking at (and listening to) the gushing water of a stream. A loving couple stand close together under a white-blossoming tree. The picture becomes an antithesis to the more cheerful picture (by Sven Erixson) on the opposite wall. The al Fresco technique has been used since the late Middle Ages and involves painting with pigments dissolved in water on wet plaster, which causes the pigments to combine with the plaster and makes the picture very durable and resistant to fading.

Artist: Otte Sköld, (1894-1958). Painter, drawer and graphic artist. Otte Sköld first painted in a Cubist style, but moved on to a more detailed style in his still lifes and portraits. His pictures of music hall and café settings are perhaps those that he has come to be best known for. Together with Åke Pernby, he created Otte Skölds målarskola (Otte Sköld’s School of Painting), in 1929. In the period 1938-42, he was a professor at the Royal Academy of Fine Arts in Stockholm, where he later became a director until 1950. 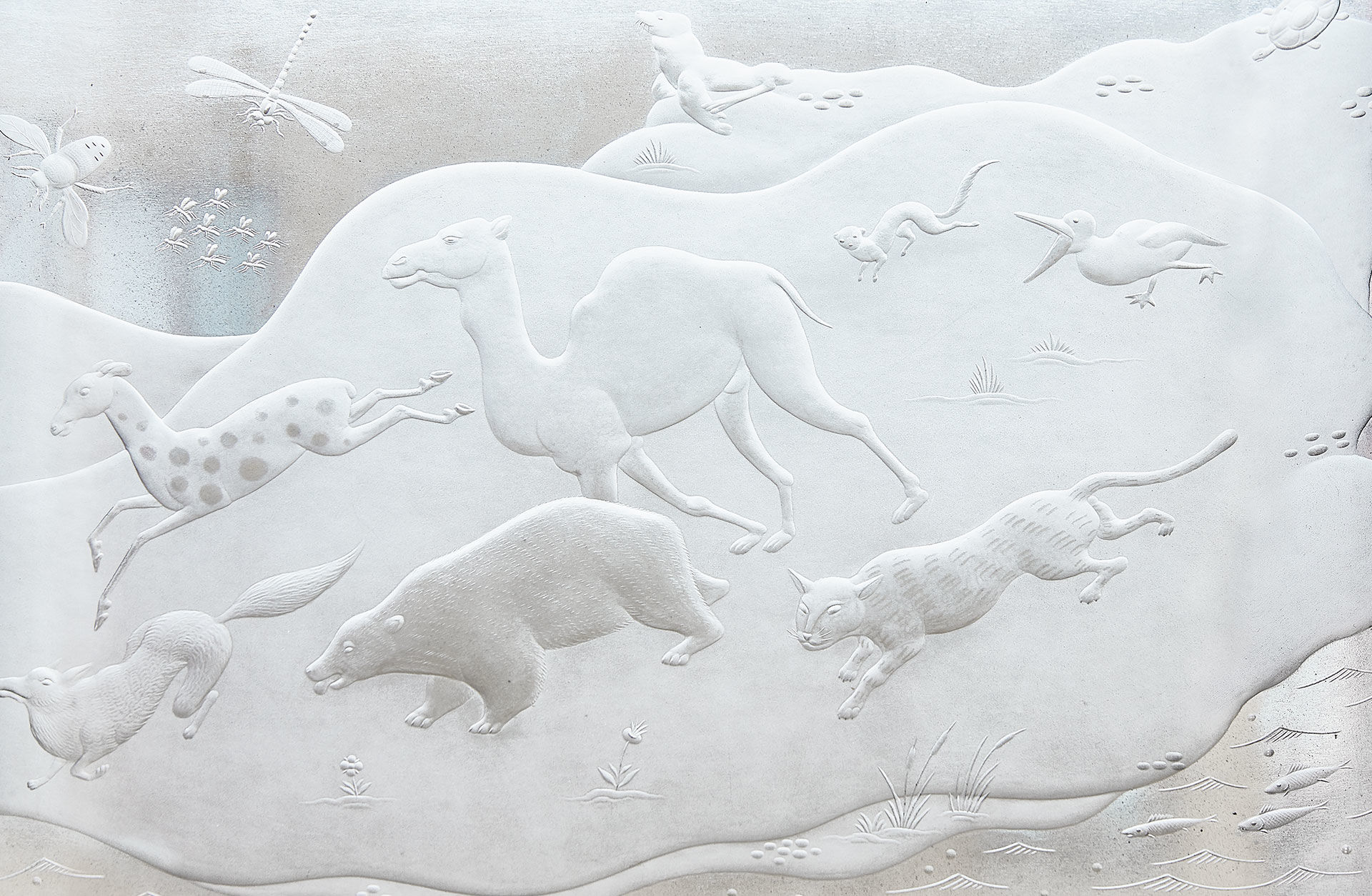 A very well-worked and imaginative picture of many different animals which are all rushing towards the music made by a man playing the lyre, where the animals then find peace.

Artist: Edward Hald (1883-1980). Painter, glass artist and graphic artist. Hald first studied architecture, but wanted to become an artist and studied under Henri Matisse in Paris. In Sweden, he worked at Rörstrand, a porcelain manufacturer, where he designed several items of tableware and contributed by these efforts to the success of Rörstrand. In 1917, he started at the Orrefors glassworks, where, together with Simon Gate, he created the so-called “graal” (grail) glass technique. He acted both as managing director and artistic director at Orrefors. © Edward Hald /BUS 2009

Listing of all art works (Swedish)pdf

The Gothenburg Concert Hall is located by Götaplatsen, at the top of avenue Kungsportsavenyn.

Join us on a tour through all the winding nooks and crannies of the Gothenburg Concert Hall.

The Gothenburg Concert Hall has been adapted to be accessible to everyone. For instance, we have wheelchair spaces in the concert premises and hearing loops with IR transference.