One of them was Ingvar Lidholm, whose music had already been played by the Gothenburg Symphony Orchestra in 1945: “Stunning… such an imaginatively, rich musical nature” (Gösta Nystroem, Handelstidningen). In 2021, we celebrate the 100th anniversary of his birth with an irresistible radio cake, the classic with melted chocolate and Marie biscuits that famous Swedish radio host Lennart Hyland made nationally known in the 1950s. 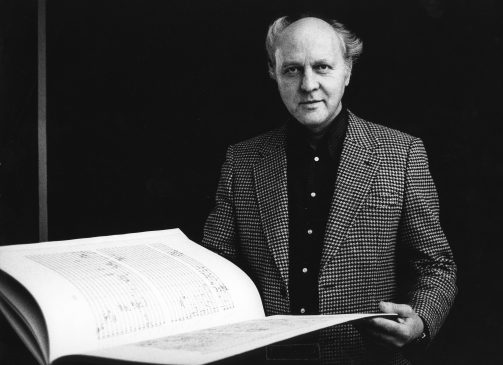 In the 1950s, Ingvar Lidholm became one of Sweden’s leading young composers when they broke away from the older generation to create new music that felt urgent and important. Bold experiments and art that avoided the expected and predictable brought new experiences to the listeners.

A good summary of Ingvar Lidholm’s work is given by Göran Bergendal in the introduction to the composer’s biography: “Through 60 years of creation, Lidholm has increasingly entered the role of the central figure in Swedish art music, a romantic in constant transformation in search of simplicity and maximum expression. Virtuosic compositional art, antiquity and Strindberg form the base for his almost classical choral works, musical drama and orchestral music.

The Gothenburg Symphony Orchestra has been playing music by Ingvar Lidholm since 1945 when its principal conductor Issay Dobrown led the orchestra in the composer’s debut work, Toccata e canto Opus 1. Since then, his orchestral works have regularly been in the orchestra’s repertoire.

Lidholm began his musical career by studying violin and conducting at the Royal Academy of Music in Stockholm and composition for Natanael Berg (private) and Hilding Rosenberg 1943-1945. He worked as a viola player in the Royal Opera Orchestra and then became city conductor the orchestra in Örebro. In 1956 he was appointed head of chamber music at Swedish Radio, in 1965 he became professor of composition at the Royal Academy of Music and in 1975 head of planning at Swedish Radio’s music department. The latter part of his life was largely devoted to composing.

Cook your own Radiokaka here

In GSOplay Sessions you get really close to artists and ensembles in imaginative film productions with creative lighting. New music that will amaze you, beautiful classics that you can not resist. Everything at the highest level with musicians from the Gothenburg Symphony Orchestra.

We are happy to be able to make classical music accessible to everyone via GSOplay.

Here's how you help us

Sign up and keep yourself up to date with what's new on GSOplay.

A special thanks to our sponsors